Société du Grand Paris and VINCI Construction announce that they are using “voussoirs made of ultra-low-carbon concrete”, which are prefabricated in mechanical moulds, at a Grand Paris Express pilot worksite (Line 18, works package 1).

VINCI Construction started fine-tuning low-carbon concretes for a variety of applications several years ago and has now grouped them together in its Exegy range. After using its breakthroughs in buildings, it has started using them in components such as voussoirs (prefabricated wedge-shaped, compression-assembled parts, to line a tunnel) and pipes for smaller tunnels.

The pilot project on Line 18, which is jointly funded by Société du Grand Paris, is designed to ascertain that the formula with a very low environmental impact works adequately, verify that it can be poured into formwork (casts) at the pace required for an industrial operation, then check the finished product’s behaviour in storage and over time under operating constraints.

An initial phase, which involved testing at CDB, a VINCI Construction subsidiary that specialises in concrete prefabrication, led to a concrete formula suited specifically to voussoirs. The second phase, industrial production at Stradal, the subcontractor selected by VINCI Construction (which has been awarded Line 18 works package 1), began in September 2021. This phase will involve producing five full rings (the equivalent of 40 voussoirs) sized for the project, and the first units will be used for full-scale qualification tests (ISO fire test, load tests).

The use of permanent prefabricated voussoirs made of ultra-low-carbon concrete, containing cement-free alkali-activated slag, in a section of a metro tunnel in use, is a world first. It will thus be an opportunity to conduct a benchmark study, in real-life conditions, on the use of a new, greener material in tunnels. Over time, qualification of this type of Exegy voussoirs and the mainstreaming of ultra-low-carbon solutions could bring about a massive drop in the carbon footprint of the tunnels built in France.

A European Technical Assessment to secure approval for the Ecocem Ultra alternative alkali-activated binder has been under way since 2019. Then, concretes containing this binder will be able to earn NF EN 206/CN certification by October 2021. Certification will open the door to using Exegy ultra-low-carbon solutions containing Ecocem Ultra binder for a wide variety of purposes and thus to significantly shrinking the carbon footprint of the concrete poured.

The production of this ultra-low-carbon concrete containing an alkali-activated binder has been patented jointly by VINCI?Construction and Ecocem. VINCI?Construction is working with partner concrete manufacturers to equip them with the know-how to produce Exegy concretes. 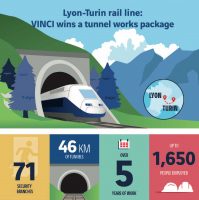 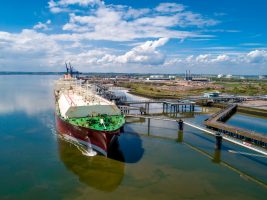