The current coastal route (RN1), which is located between the sea and the cliff face, is subject to multiple natural hazards (rockslides, rain floods, flooding due to high tides); as a result, access to the road is often limited or suspended, intensive maintenance is required, and fatal car accidents occur fairly regularly.
The new coastal road is designed to replace RN1; it is being built above the sea 80 to 300 metres from shore in order to elude these natural hazards. This is a unique project in terms of its length (at 5.4 km, it is France’s longest viaduct of its kind), its width (nearly 30 m), its deck featuring a flexible dual 3-lane configuration that can accommodate a future dedicated lane for public transport (tram-train or bus). Given its open marine location, the infrastructure is exposed to particularly harsh weather and sea conditions (cyclones and extremely high tides) as well as sensitive and variable geotechnical conditions. In addition, the project must comply with very stringent environmental requirements, especially with regard to marine wildlife. 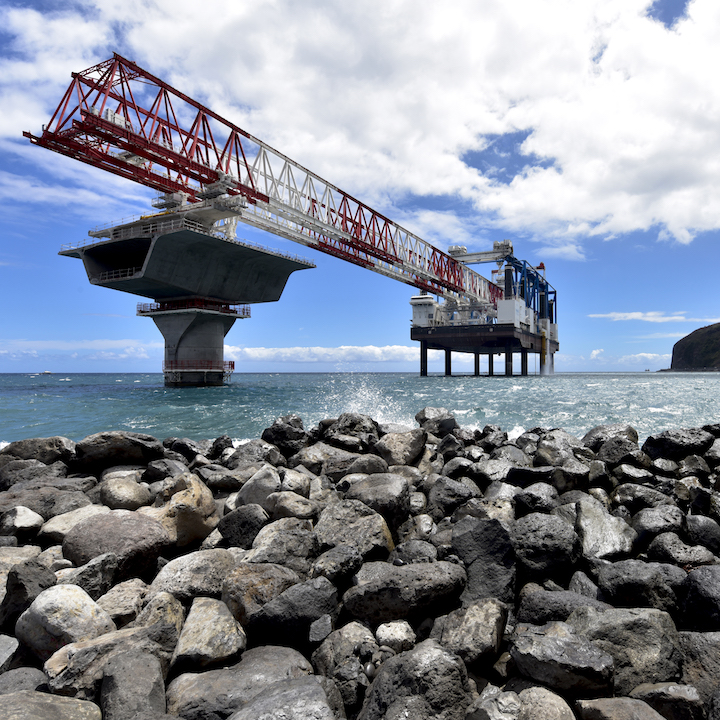 To avoid having to contend with the tides, we decided to prefabricate all components on land. Accordingly, the structure’s 48 piers were prefabricated at a production plant and transported to the construction site on a huge barge. The same approach, that is, minimising work at sea, was used for the mega-segments resting atop the piers. A set of seven segments, each weighing 2,400 tonnes, and forming the deck portion over each pier was conveyed by barge and installed at the same time as the pierheads. The 1,386 continuous segments that form the rest of the deck of the viaduct were manufactured at a production plant at a rate of three or four a day and transported at night on the current coastal road (RN1) and installed using a 278-metre launch beam. As a result of our decision to maximise on-land construction, we had to adapt our production and handling capacities to accommodate the size of the prefabricated components. The two production plants for prefabricated piers and segments were erected in the harbour zone and feature an extensive set of specific tools. For instance, the segment-production site was equipped with a 350-tonne gantry to move parts and components. The segment-production plant includes three concrete-production units (one of which supplies the neighbouring pier-production plant), a system to treat the water used to clean concrete mixer trucks, a cooling system for aggregate materials, and mixers. In addition, there is an ice-production unit with an output capacity of 45 tonnes a day to help control the temperature of the concrete even during the most intense heat waves. The whole production set-up has the merit of being environmentally friendly so as to meet the contract’s strict requirements in this regard. Work teams, for example, have to protect whales from underwater nuisances created by the worksite and protect nearly coral reefs from the fine dust generated by construction processes.

The viaduct was designed to last 100 years and built to withstand exceptional shocks, including collisions by sea vessels. The underside of the deck is set 13 to 22 metres above the sea – beyond the reach of the highest waves.

This is one of the major projects currently in progress on French territory. The new coastal road, which is set to open in 2018, will facilitate travel between the capital, Saint-Denis, and the island’s trading seaport some 20 kilometres to the west. It will replace the current dual 2-lane corniche road located at the foot of the cliff face, which is infamous for being dangerous. The current road is exposed, on the one hand, to sea spray from the high tides (a common occurrence given the absence of a continental plateau) and, on the other, to rockslides despite the presence of safety nets. What is more, the authorities must close one or two lanes on the road for two months a year on average to protect users. As a result, the use of alternating traffic flow causes major congestion on this road. The future new coastal road, 12.5 kilometres long, located almost entirely above the sea, and running alongside the coast, will not be affected by rockslides or high tides since it is 20 to 30 metres above level of the sea. The new coastal road will also be much larger; in fact, it will be a dual 3-lane carriageway that includes a dedicated lane for a future public transport system as well as a dedicated pedestrian and bicycle path.
Just as the grand ravine viaduct, this project will endow Reunion Island with an infrastructure designed to reduce traffic congestion and provide users with greater comfort and safety. 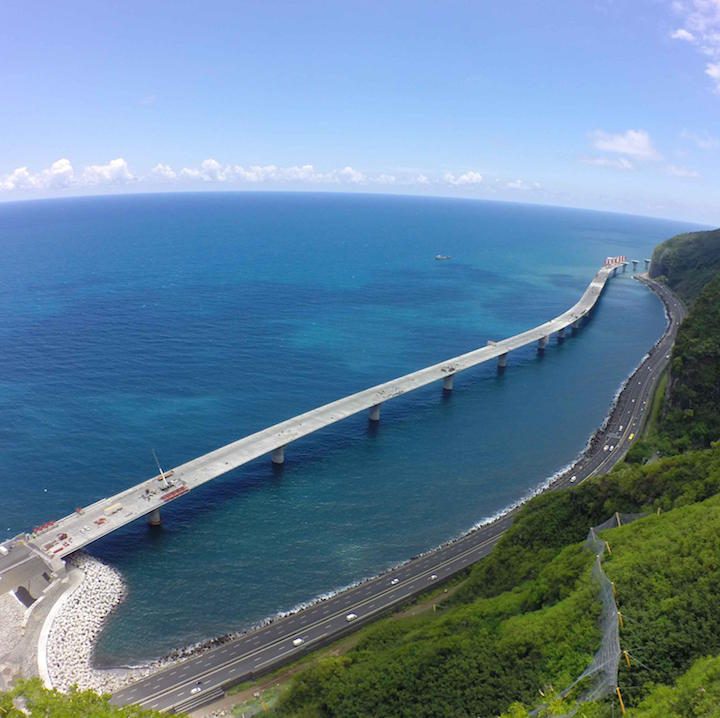 Size of the viaduct

“The new coastal road project is exceptional due to its features and its location above the sea. Because of the natural hazards the project faced, its technical complexity make it one of the world’s top civil engineering projects.”