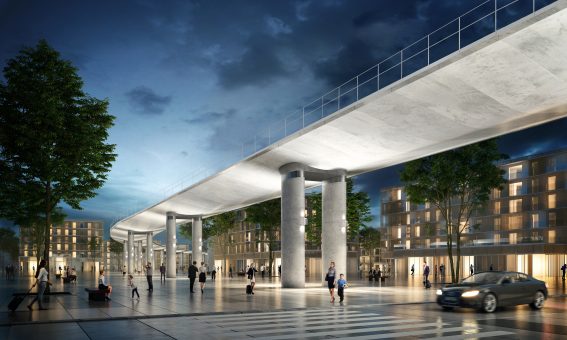 Société du Grand Paris awarded the consortium of companies* led by VINCI Construction the contract to build the viaduct for metro line 18 of the Grand Paris Express – the largest urban mobility project currently under way in Europe.

Worth €193 million, 20% of which will go to SMEs, the contract covers all the civil engineering work on this 6.7 km engineering structure, with the voussoirs being precast locally. The viaduct will be located towards the middle of line 18, a metro line that will connect ten stations between Orly airport and Versailles. The contract will contribute to the development of the Plateau de Saclay, a centre of excellence that is home to a cluster of research labs, university campuses and higher education establishments.

The project will employ 400 people at its peak and the equivalent of 10 full-time jobs will be created for people in back-to-work programmes over the 30-month project. VINCI will also mobilise its endowment fund, Chantiers & Territoires Solidaires, which supports employment and community initiatives located near Grand Paris Express worksites.

Work on the first section of line 18 has begun and is being carried out by another consortium also led by VINCI Construction. Furthermore, the VINCI Group is involved in other works packages of the Grand Paris Express, combining the expertise of and synergies between its subsidiaries: VINCI Construction for underground works, Eurovia for urban development and railway works, and VINCI Energies for information technology, data and electrical engineering.