Currently, Grand Paris Express is Europe’s largest infrastructure project: it will double the length of the existing metro system by adding 200 km of new lines, including four new lines (90% below ground) around Paris (Lines 15, 16, 17 and 18), extending two lines beyond Paris (Lines 11 and 14) and 68 new stations and new districts around these future urban-transport hubs. All work will be carried out in densely populated urban areas, that is, in the middle of busy cities.
Société du Grand Paris (SGP), a public establishment created by the French government, will oversee deployment and funding for this major urban-development project. 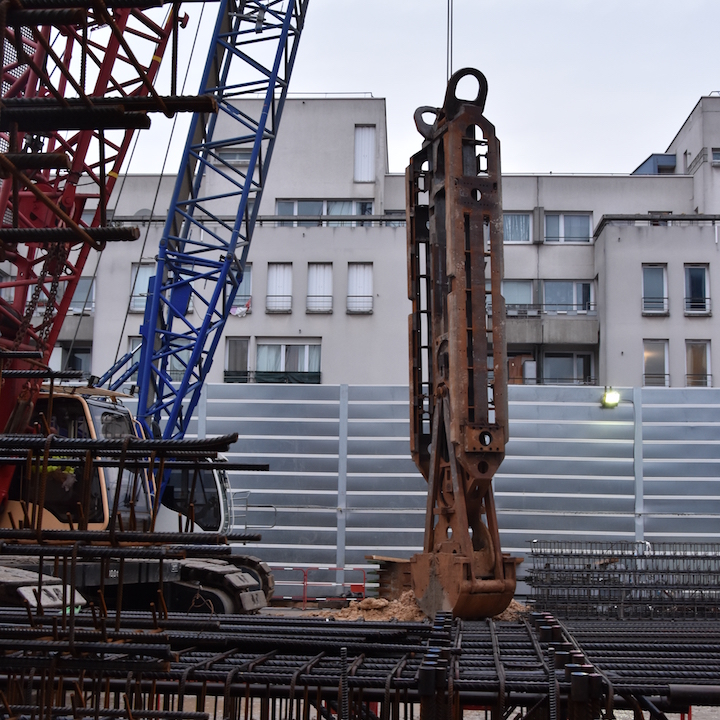 Section T3C of Line 15 South, where an 8-km tunnel will be built and civil engineering tasks (five new stations and eight shafts) and special works (filling in a quarry) will be carried out, is an outsized project that requires major logistical resources. On this project, two earth-pressure balance TBMs (with a diameter of nearly 10 m) will have to operate concurrently at 30 to 40 m in depth in varying geological conditions quite near the water table. In the civil engineering mandate, five new stations and eight shafts will be built, including shafts with diameters ranging from 7 to 11 m reaching depths of 40 to 50 m. Villejuif Gustave-Roussy station, which is emblematic of this section due to its architecture and size (65 m in diameter 42 m deep), will link Lines 15 South and 14 South.
In addition, special works are required. This portion of Line 15 running under many quarries must be prepared for tunnel-boring. Preparatory works will last from several weeks to several months.

Lot GC02 for Line 14 South involves building a 4.6-km tunnel between the future station at Maison Blanche Paris XIII and the TBM entry shaft at Jean Prouvé, which will be bored using an earth-pressure balance TBM. This lot also includes construction of a new station at Kremlin Bicêtre Hôpital and five ventilation and one emergency-rescue shaft and filling in 14 quarry sites. This large-scale project conducted in busy urban settings will be carried out across the following communes: Paris, Kremlin Bicêtre, Gentilly, Villejuif, and L’Haÿ-les-Roses.
The use of “alternative” conveyance modes such as river and rail transport will be used in part to remove excavation materials.

“Grand Paris Express is a strategic project for the future of Île-de-France and its economic development. It will help create jobs, open up and connect localities, and inject energy into the whole region. This ambitious project will marshal the Group’s expertise for the next 20 years. It’s a huge technical challenge but also a true human challenge”. Xavier Huillard, CEO, VINCI

Lots GC02 for Line 14 South and T3C for Line 15 South will employ nearly 350 and 900 people, respectively. Also, as part of these projects, innovative and ambitious social initiatives are being implemented. Key job market reentry measures, including training and orientation, are planned for future staff who are currently unemployed. To that end, as early as 2011, VINCI implemented its ViE (VINCI Insertion Emploi) programme, which supports Group subsidiaries in helping people get back into the labour market.
An endowment fund (known as “Chantiers et Territoires Solidaires”) designed to foster social and employment solidarity was created to support general-interest projects in proximity to worksites.
With its investment of nearly €35,000 million and its work and commissioning schedule extending to 2030, the Grand Paris Express mega-project will have a considerable social and economic impact on the Île-de-France region as a whole. The new fully automated and connected metro system will serve 2 million passengers a day and considerably reduce travel times, which are currently impediments to employment and quality of life for the residents of Île-de-France. 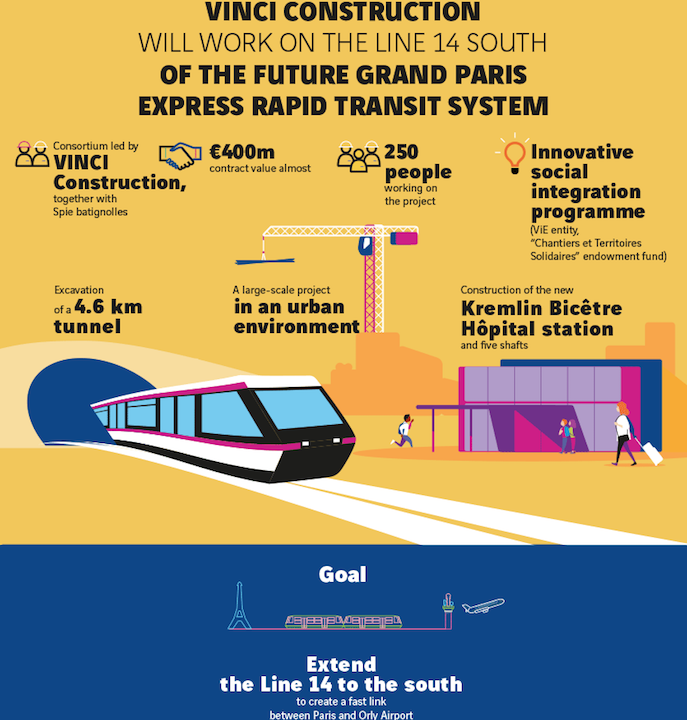