The old Assiut Dam is located on the Nile River between Cairo and Luxor in Upper Egypt. It is one of the largest hundred-year-old structures built to regulate the river’s floodwaters. As the dam was beginning to show signs of fatigue, the government of Egypt entrusted us with the task of building a new dam 400 metres downstream. Having delivered the Naga Hammadi Dam, located farther south, in 2008, VINCI Construction Grands Projets was able to obtain this new contract thanks to the quality of its bid from a technical standpoint. A variant developed by our Engineering Directorate allowed us to carry out concrete works in dry conditions in the Nile riverbed, even in rising waters. The new dam will feature a reservoir 1.5 metres higher than the old dam, thereby increasing the flow of water in the irrigation system connected to the dam and extending the agricultural area in the valley. In addition, the project calls for the construction of two locks to improve river navigation and access to tourism sites in Upper Egypt. 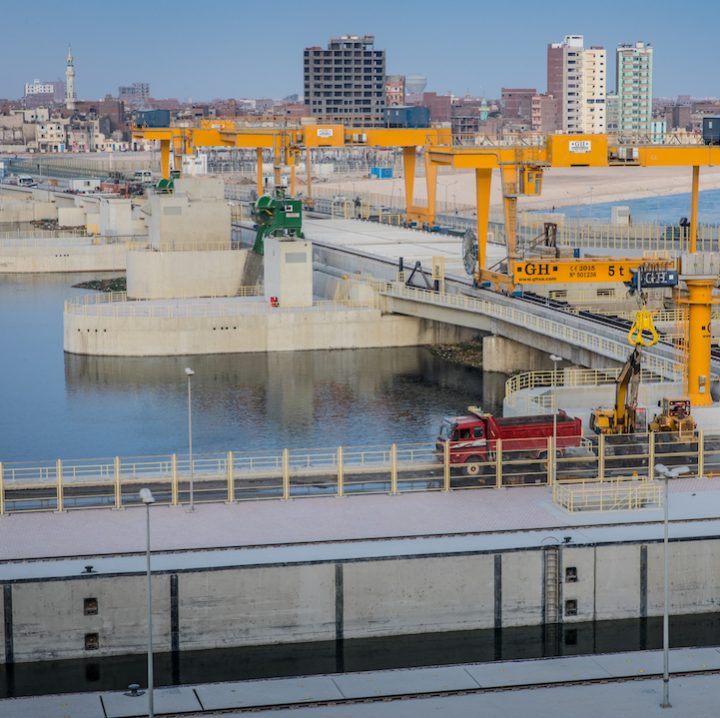 Originally, the project included the partial dewatering of the river 48 to 39 metres above sea level as well as complex and onerous underwater concrete works using sheet piling.
VINCI Construction Grands Projets made an alternative proposal, namely, to extend the dewatering process. Our plan was to lower the Nile Valley aquifer to 28 metres (that is, 20 metres above sea level) on highly permeable alluvial land. Once this area was dewatered, we implemented a pumping system consisting of 89 deep wells to collect water 35 metres below the Nile River. This system was built to handle the Nile’s legendary floodwaters. To ensure work was carried out without interruption, we evacuated up to 300,000 cubic metres of water a day.
The worksite had to be isolated with a cofferdam, 1,600 metres in circumference, consisting of an embankment made up of soil, sand, and gravel. It was equipped with an impermeable screen, cutting across the Nile over a span 400 metres in width. The river, 800 metres wide at this location, flowed through the remaining 400 metres, where the riverbed had been dredged to make it deeper.
Finally, the project required no less than 370,000 cubic metres of concrete (the equivalent of a latest-generation nuclear power plant) and 65,000 tonnes of reinforcement.

The Engineering Directorate built on the experience acquired in the construction of the Naga Hammadi Dam and adapted this know-how to Assiut and its specific geological conditions.

One of our greatest challenges on this project was to train teams to comply with the Group’s safety standards. To that end, VINCI Construction Grands Projets developed ten “Skill Up” modules, thereby providing training resources – that combined technical and safety issues – specifically designed for this project. In addition, every month, we award a special prize of 100 Egyptian pounds (the equivalent of a day’s wage) to workers who apply safety guidelines most effectively.
The new Assiut Dam adds to the Group’s numerous achievements in Egypt, where it has been present for over a century. After delivering the Al Azhar road tunnels in 2001 and the Ain Sukhna rolling mill and Naga Hammadi Dam in 2008, VINCI Construction Grands Projets is currently working on Phases 3 and 4A of Line 3 of the Cairo Metro, having already led the construction of Lines 1 and 2.
The diversity of the projects carried out in Egypt clearly demonstrates VINCI’s wide-ranging expertise and reflects its long-term relationship with Egyptian authorities.

Client
Ministry of Water Resources and Irrigation of Egypt – RGBS

“We’re approaching the African market, which is very active and competitive, by being selective. We target calls for tenders that place a great deal of emphasis on technique and on which we can bring real added value.”