In 2006, Qatari Diar, a property-development company held by Qatar Investment Authority, decided to build an underground car park and a superior-quality urban landscaped park at the foot of the towers in the West Bay district in Doha.
In 2007, on the basis of the architectural concept devised by Murphy Jean Architects and Rainer Schmidt Landscape Architects, ARUP Doha developed a draft project design for Qatari Diar.
In 2008 QDVC, a company held jointly by Qatari Diar and VINCI Construction Grands Projets, was awarded a contract to implement the Sheraton Park Project. 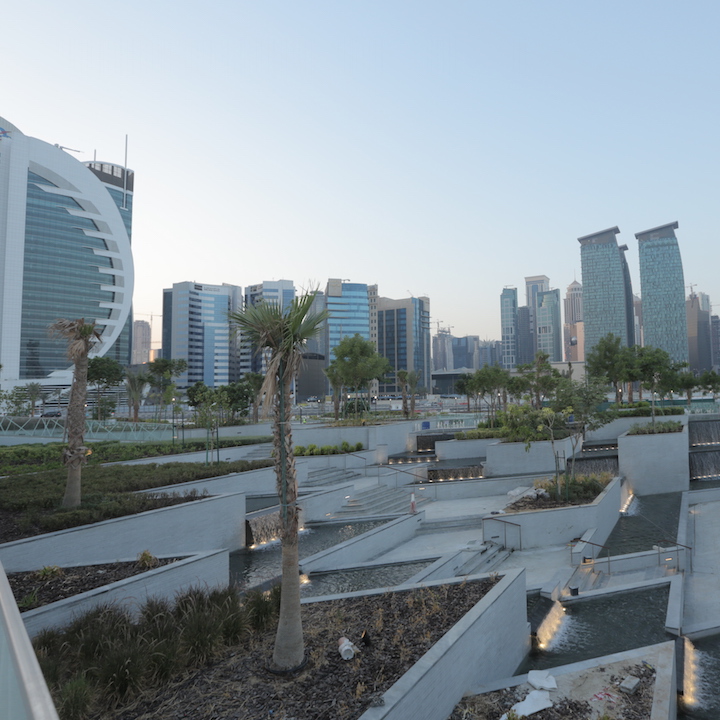 This trapezium-shaped site covering 7.3 hectares was used as a car park by the Sheraton Hotel; there are roads on all four sides of the site. The ground slopes down a total of five metres from the Sheraton Hotel to the Corniche. As a result, all underground structures, even the shallowest, are in the water table, which is roughly at the same level as the sea 150 metres away. Total excavation volume was one million cubic metres, half of it loose soil removed with a hydraulic excavator. Drawdown of the water table was performed by set of pumps installed at the bottom of excavated wells 20 to 25 metres deep connected to a network of collection pipes; collected water is discharged into the sea.
Below the park there is an underground cark park with 2,700 parking places. The size and layout of this space are certainly noteworthy. Its structure consists of a general slab one metre thick resting directly on excavated soil, a perimeter wall of a nominal thickness, an intermediary slab where the car park is on two levels, and a cover slab designed to bear the load of the park above, that is, approximately 4 tonnes per square metre.
In accordance with specific architectural preferences, all above-ground structures, both peripheral and central, were carefully designed. Accordingly, access ramps to the car park, staircases, and lifts are as few and understated as possible so as not to obstruct sightlines. The car park is largely underground; consequently, we made sure it was completely watertight. The weight of the structure, including the one-metre embankment, accounts for Archimedes’ Law of Buoyancy at all times.

We took painstaking care in monitoring water-pumping operations throughout the project. The water was systematically analysed and treated before discharge into the sea just a few metres from Doha’s most valued private hotel beaches. With the Sheraton Hotel operating nearby, we had to implement drastic noise-attenuation measures.

The Sheraton Park Project provides the residents of Doha with a public park, covering 73,000 cubic metres, of outstanding quality. The park features basins, fountains, children’s playgrounds, cafés, and restaurants.
This is a public park that is accessible to pedestrians and cyclists. It features basins and numerous plants in a setting whose harmonious architectural design provides a new living environment in this booming business district. As for the car park, its construction, too, featured leading-edge technology and ingenious architecture.
All finishing work – including walls, flooring, and ceilings – is of a high order. The project includes a dozen lifts. It also calls for the installation of a user-guiding system leading to available parking places in the car park.
Following delivery of the PS70 pumping station and car parks in the new city of Lusail, QDVC has achieved its third success story in Qatar with the Sheraton Park Project. Following a limited opening for the GCC Summit in December 2014, the park was opened to the public in December 2015. 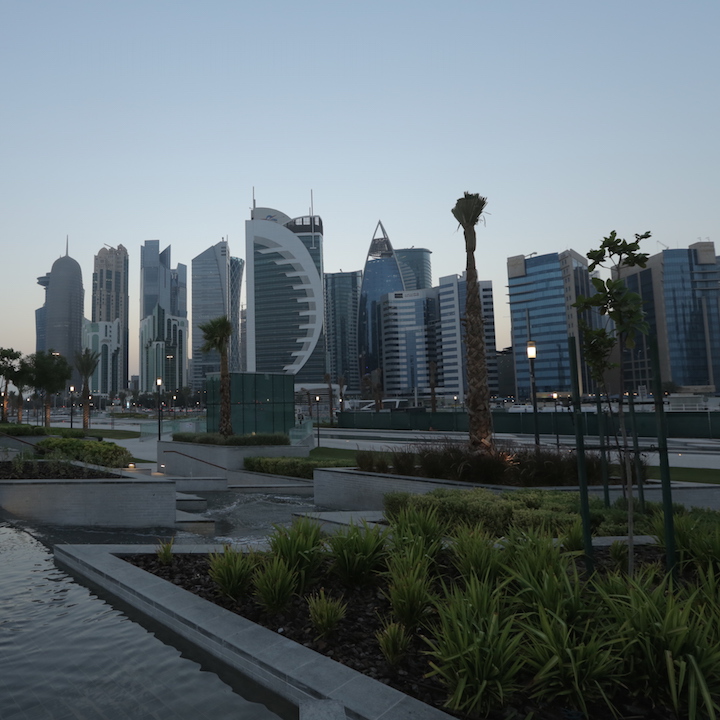