In 1991, the Portuguese government put out an international call for tenders for the design, financing, construction and operation of a bridge spanning the Tagus at its widest because the 25 de Abril suspension bridge was no longer adequate. The concession consortium LUSOPONTE, of which Campenon Bernard SGE was part, was awarded the contract in 1994.
The contract required the bridge to be inaugurated at the time of the 1998 Lisbon World Fair, which meant extremely short deadlines. The Novaponte group, headed by Campenon Bernard SGE, was responsible for the construction. The construction started in January 1995, three months before the concession contract was signed. The inauguration of the bridge took place on time three years later. 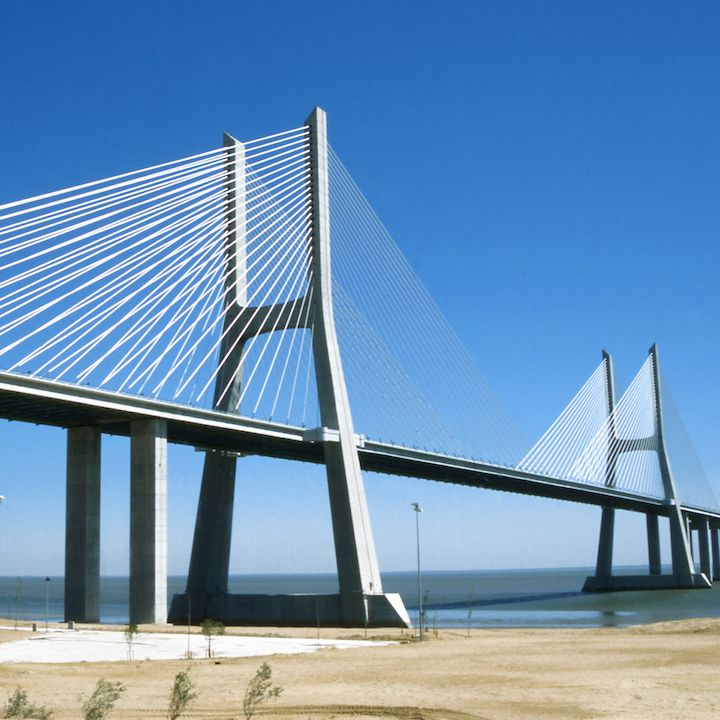 Several elements must be taken into consideration to highlight the complexity of this construction. First, it consists of five distinct parts: the northern viaduct, the expo viaduct, the cable-stayed bridge, the central viaduct and the southern viaduct, not forgetting the interchanges. Given the tight deadline, a single phasing was used. Satellite coordination helped ensure project consistency. Without this new technology, the land curvature and the bridge length would have distorted the project by a metre.
The earthquake risk was also taken into consideration in the design phase. Portugal is an important earthquake zone as proven by the earthquake of 1755, which remains the largest one known to date. So, the Vasco da Gama Bridge can resist an earthquake that is 4.5 times greater than the building resistance standards in Lisbon.
Each part of the bridge reflects this challenge. The northern viaduct is equipped with a shock absorber to absorb longitudinal shifting in case of an earthquake. The deck of the cable-stayed bridge is not fixed to its pylons, but can move sideways and lengthwise. Its flexible piers were designed for long periods of vibration. Finally, the hydraulic couplings on the main viaduct piers, while allowing the viaduct to move in service, block it in case of an earthquake.

Designed to resist an earthquake 4.5 times more powerful than the one in 1755 and winds up to a speed of 250/hr, the Vasco da Gama Bridge is built on two piers with a diameter of 2.2 m and 1.7, respectively, with foundations penetrating 95 m below sea level.

The Vasco de Gama Bridge is a matter of national pride because of its technical feats. In addition, the urban development promise that its construction carried has come true. By linking the Segunda Circular (2nd Circular) to the EN10 national trunk road and the future A12 motorway, this bridge eases the growing traffic in Lisbon and facilitates the route to Spain and the Algarve province. By serving the south bank of the Tagus, it brightens the development prospects of the area.
This bridge is also noteworthy for respecting environmental standards. Most of the measures taken by Lusoponte for environmental conservation were new at the time in Europe. Sound wells were constructed, canal pier base scour protection was installed and stormwater retention basins for the south bank were created.
Also on the south bank, special measures were taken for the recovery of the Samouco salt marsh, which is a nature reserve where certain species of birds, fish, crustaceans and molluscs shelter, reproduce and feed. This reserve is spread out over 400 hectares. So, in spring 1995, work was interrupted for three weeks to allow for the passage of migratory birds. 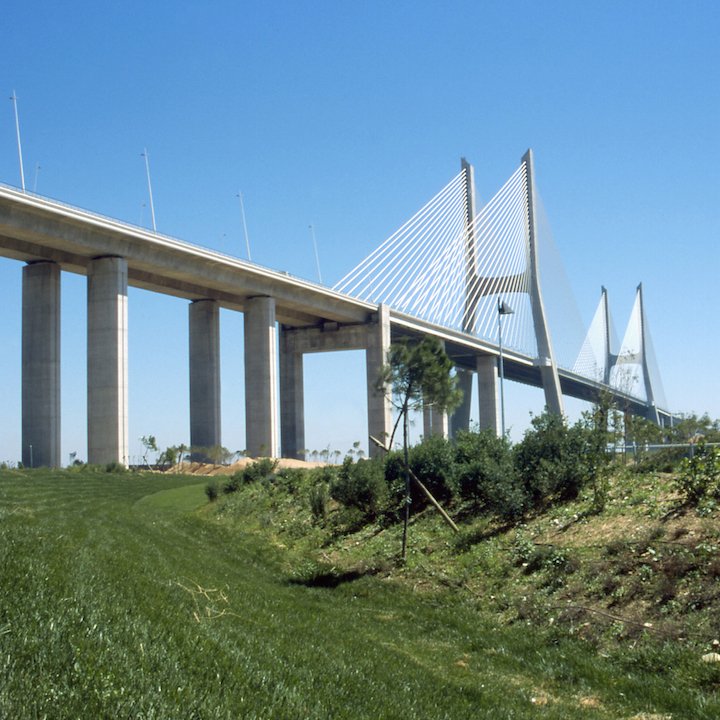 “This road bridge spanning the Tagus was remarkable for its length, complexity, number of structures, techniques used, construction deadline and the quantity of materials necessary. With 700,000 m3 of concrete, it is the site with the largest foundations in Europe for that period.”